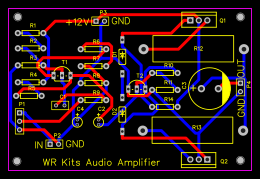 This project demonstrates, using a simple simulation schematic, the use of a Kelvin Connection, which is the name given this type of 4 wire connection used to accurately sense the voltage across a resistor or other load by minimising the unwanted voltage drops across the resistances of the connections to each end of the resistor.

This project also demonstrates a way to preserve these Kelvin sensing tracks and associated pads on a PCB when the resistances of the high current path connections to the resistor ends are minimised by using copper areas.

The same technique can be used to maintain the separation of tracks and associated pads in other situations where they would otherwise become embedded into surrounding copper areas, such as for some types of connections to high speed decoupling capacitors.

Suppose it is required to accurately measure the voltage across a very low resistance current sensing resistor.

It is quite possible that the resistance of the copper tracks carrying the surrent into and out of the resistor may be comparable to the value of the sense resistor itself.

At each end of the resistor the high current path and the low current Kelvin voltage sensing track are the same net.

It is often useful to reduce the resistance of the high current path by embedding it into a copper area with that net name. However, when the copper area is built (or rebuilt) then the Kelvin sensing track and associated pads will also be - at least partly - embedded into the copper area. This will defeat the purpose of the Kelvin connection.

It is possible to avoid this problem by carefully constructing the outline of the copper area so that it is kept clear of the Kelvin sensing track and associated pads but this can be very tedious and time consuming. It also would need to be adjusted if the resistor has to be moved or the Kelvin sensing tracks and associated components (and therefore pads) rerouted for any reason.

A simpler solution is to route the basic high current paths to the pads at each end of the resistor and then seperately route the Kelvin sensing track from the pads to their associated "downstream" or destination pads, for example for a connector to a voltmeter or to the inputs on an instrumentation amplifier. This ensures that, even though the Kelvin tracks will inherit the net same net name, they are created as separate segments and are not merged wth the rest of the net to which they are each connected.

Let's assume that the High Current Path nets routed to each end of the resistor are named are HCP1 and HCP2.

EasyEDA may ask if you are sure that you want to rename these tracks (in this instance, yes, you do!) and may highlight DRC errors when you do but, for the moment, these can be ignored.

Next, the required copper area can be created and assigned to HCP1.

The copper area will build around the HCP1 net and component pads connected to it but will have a clearance around the renamed KELVIN1 track segment.

Repeat this procedure for the copper area surrounding the HCP2 net and the Kelvin tracks and associated component pads connected to it.

Similarly, the copper area will build around the HCP2 net and component pads connected to it but will have a clearance around the renamed KELVIN2 track segment.

Therefore it is strongly advised to accept that these tracks and associated pads will generate DRC errors and then either:

(ii) do not rename them until after the very last time that the copper areas are rebuilt as part of the final checks before generating and submitting the Gerbers as described in:

Then, in the case of (ii), when the final Update PCB... (or Import Changes...) is done and the final DRC run, there will be no DRC errors associated with the Kelvin tracks and pads.

Demonstration of a Kelvin Connection to a resistor