Electronic Circuit Simulation Sofware： I.What is Electronic Circuit Simulation . Electronic circuit simulation uses mathematical models to replicate the behavior of an actual electronic device or circuit. Simulation software allows for modeling of circuit operation and is an invaluable analysis tool. Due to its highly accurate modeling capability, many Colleges and Universities use this type of software for the teaching of electronics technician and electronics engineering programs. Electronics simulation software engages the user by integrating them into the learning experience. Simulating a circuit’s behavior before actually building it can greatly improve design efficiency by making faulty designs known as such, and providing insight into the behavior of electronics circuit designs. In particular, forintegrated circuits, the tooling (photomasks) is expensive, breadboards are impractical, and probing the behavior of internal signals is extremely difficult. Therefore, almost all IC design relies heavily on simulation. Some electronics simulators integrate a schematic editor, a simulation engine, and on-screen waveforms , and make “what-if” scenarios easy and instant. They also typically contain extensive model and device libraries. These models typically include IC specific transistor models such as BSIM, generic components such as resistors, capacitors, inductors and transformers, user defined models (such as controlled current and voltage sources, or models in Verilog-Aor VHDL-AMS). II.Introduction of Some Electronic Circuit simulation Tools 1.Easyeda Easyeda is an web-based Schematc capture , Spice simulation ,PCB layout Tools which provides one-stop shop for Electronic Projects. You could edit schematic on Easyeda Editor and stored file on cloud server. 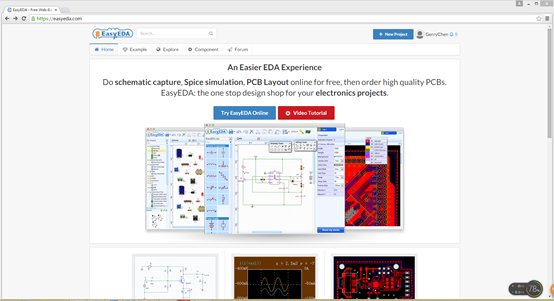 Easyeda is an web-based simulation tool using ngspice . For more info about the simulation of Easyeda , pls go to the Simulation ebook of Easyeda https://easyeda.com/Doc/Simulation-eBook/introduction.htm#Whatthisbookisnotfor For every circuit being simulated, EasyEDA converts the schematic into a textual description of the circuit that is then passed to the simulator. This textual description of the circuit is called a spice netlist. Notice1: Capacitors (unless using the more advanced options in ngspice) are ideal: they have no parasitic (leakage) DC resistance in parallel with them. This is why both ends of a capacitor must have a DC path to ground either through the external circuit or explicitly by adding a resistor; Notice2: Voltage sources (including independent V and dependent B and E voltage sources) have the opposite problem. They are ideal so they have zero resistance. The same is true for simple inductors. If you connect voltage sources directly in parallel then ngspice will throw an error even if the voltage sources are set to the same value (if they're not then an infinite current would flow and that would then throw a different error). The same problem arises if you connect a voltage source directly in parallel with a simple, ideal, inductor because the voltage source tries to drive an infinite current through the inductor. On Easyeda , you can make you custom models . https://easyeda.com/Doc/Simulation-eBook/Custom-modelling.htm#Custommodelling We can make simulation on the IC by creating a model for it accroding to the datasheet of LM56EE.Below is the schematic of a Dual Output Low Power Thermostat LM56EE.

—A simulation schematic with the model of LM56EE