My remix of Len KDORC's most excellent project - https://github.com/KD0RC/Teensy-Maestro-for-Flex-6000-radios The TeensyMaestro is a Teensy (Arduino work-alike) based set of controls for the FlexRadio 6000 series. It provides knobs, buttons, display and a keyer. It is designed to augment SmartSDR (SSDR), not replace it. There are many functions that the TeensyMaestro cannot perform that still need to be done using SSDR or a real Maestro. The TeensyMaestro uses a USB cable for power and an ethernet cable to connect with the radio. All communication with the radio is via TCP/IP, not the USB cable. The primary design goal was to provide the most used controls in the form of knobs and buttons while retaining all the power and convenience of the computer-based SSDR. It uses the extensive TCP/IP Application Programming Interface (API) provided by FlexRadio. It also leverages the Flex Arduino library built by Enzo, IW7DMH. Without this library, the TeensyMaestro would not have been built. While the TeensyMaestro has a color touch screen, it does not display a panadapter or waterfall. It does show basic slice information in a similar way as the “flag” does in SSDR. Similarly, the touch screen is a rudimentary resistive type, so it does not have cell phone like capabilities but provides some simple functions. There are no functions that rely solely on the touch screen; the physical controls cover all touch screen functions.

LOU> Thanks for the through review. I am going to paste it below and comment in line IN CAPS - I'M NOT SHOUTING AT YOU but just want to differentiate you vs me:

Well Lou, I think I didn't draw the encoders the way I should have in the KiCAD schematic. I did all of this with wires, not a PC board in mind (guess you can tell that I am not an Engineer...). I think you will need to use clipleads to wire up the Teensy to the encoders to verify which way they need to be wired so that you get the A and B sides correct. I did label the green and white wires on the VFO encoders correctly, so there is that...

LOU> PRETTY GOOD FOR A NON ENGINEER! I AM A COMPUTER ENGINEER (EE WITH DIGITAL AND COMPUTER STUFF BUILT IN) BUT IN 37 YEARS IN PROFESSIONAL LIFE I HAVE NEVER BEEN ONE ALSO!

The Teensy will work without the tft display, so if you use an encoder clipped in, it should work. Just watch the corresponding control in SmartSDR to verify correct control direction of rotation. I will put version 1.009 out later today so that you can run it without the SD card being present.

LOU> YEP THAT IS WHY IT WILL TAKE A WHILE TO GET TO PRODUCING A PCB. I WANTED TO TEST ALL THAT FIRST AND ALSO CHECK PART HEIGHT TO MAKE SURE I GET EVERYTHING THROUGH THE FACEPLATE AT THE RIGHT HEIGHT

I see the caps across the encoders, so that looks good. I think they should be across the switches as well to **** any stray RF. Let me know if there is a reason not to (I still haven't put them on my own unit...).

I WAS TOYING WITH THAT IDEA ALSO. I WANTED TO GET THE BASICS DONE AND CONTINUE WITH MODS. THAT IS AN EASY AND CHEAP THING TO DO. I PLAN ON THE BOARD BEING SMD AND HAVE THE PCB COMPANY MOUNT ALL THE SMDS.

VFO A and B show 12 V on Vcc. I would only use 3.3 so that they take power straight from the 3.3 v rail on the Teensy. If you look at an oscilloscope trace of the A and B lines, you will see very clean switching with 3.3 V, so even though the encoders are rated for more voltage, it is not necessary. The optical encoders show Clk and Data lines, but they are really just quadrature transistor switches like the mechanical encoders.

LOU> YEA - WAS DEBATING THIS. I HAVE READ SOME REVIEWS OF MISSING SOME OF THE PULSES AT THE LOWER VOLTAGE AND THE VFO ENCODERS ARE OPEN COLLECTOR SO YOU CAN POWER IT AT A DIFFERENT VOLTAGE THAN THE DATA LINES AND SINCE I AM GOING TO HAVE 12V AVAILABLE... BUT IT WOULD BE NICE TO BE ABLE TO POWER IT FROM 12V OR USB.

Are M0 and M1 the Sparkfun boards or did you substitute the actual multiplexer chip? If the latter, then there are probably a couple of resistors or diodes or something missing. The Sparkfun board has two little components, one is a 10 K resistor (pin 15 to gnd??) and I think the other is a diode (Vcc to gnd).

LOU> YES!!!! GOOD CATCH!!! I WAS INTENDING TO GO BACK AND DO THAT BUT FORGOT AT MIDNIGHT LAST NIGHT WHEN I "FINISHED" I ALSO WANT TO REPLACE SMTPE610 WITH SMD

The STMPE610 needs MODE to tie to Gnd to put it into the proper operating mode for I2C operation.

LOU> MISSED THAT TOO

I have not yet put a sidetone in for the keyer, but plan on using Teensy pin 26 (34_DAT1_MISO2) to generate the tone. I will probably use an I2C amplifier that would connect to pins 40 and 41 in parallel with the STMPE 610 SCL and SDA lines. These might be places to put headers so that they can be wired in later. I am not in a hurry to do this part, but will need to if I ever get this thing to work remotely. Would also need a place to put a low pass filter to smooth out the sidetone. I wish there was an I2C programmable tone generator available...

LOU> IVE SEEN PEOPLE MOVE TO SERIAL (USB) MIDI FOR ATTACHING A KEY AND THEN USE MIDI LIBRARY TO PRODUCE THE TONE. THIS ALSO ALLOWS IT TO WORK WITH A GROWING NUMBER OF SOFTWARE PACKAGES THAT SUPPORT IT. JUST A THOUGHT.

So other than those couple of things, everything looks good to me. Hopefully, I haven't missed anything. 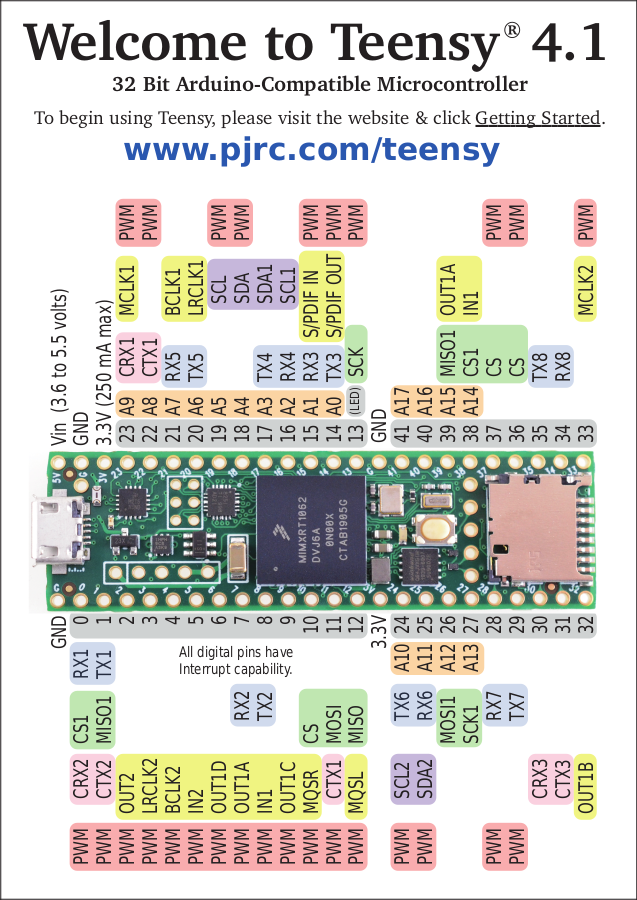